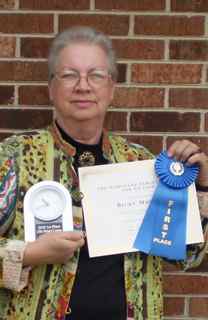 Following the unfortunate bucking of his horse when it was startled by the posse's shots, Tex--who now lay in a disheveled heap in the sagebrush--pushed back his sweat-stained Stetson from one deep-set eye, spat a stream of tobacco juice at the nearest cactus, and reflected momentarily that the men approaching him with ropes probably weren't just out for a skip, and--if they were--his freshly broken ankle would have to cause him to decline any entreaties to join them.

The above dreadful sentence (and four others of mine, including my 1999 "Dishonorable Mention") appear in It Was a Dark and Stormy Night (Friday Publishing, 2008). 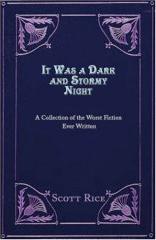 Vowing to get revenge on his English teacher for making him memorize Wordsworth's "Intimations of Immortality," Warren decided to pour sugar in her gas tank, but he inadvertently grabbed a sugar substitute so it was actually Splenda in the gas.

"Well, Mummy," replied little Felicity in response to her mother's chiding, "I know for a fact you are lying to me and that I was not left on the doorstep by gypsies, as you are fond of telling me, for gypsies are not in the habit of abandoning infants on the twentieth floor of New York apartment houses, and furthermore there is absolutely no room on the street for them to park their horse and wagon, so--when you are old and in need of custodial care--we shall then see who has the last laugh as I abandon you in a substandard adult care facility."