My Appalachian coming-of-age novel is available for Kindle and in paperback from Amazon.com. Them That Go is self-published via CreateSpace, and I am grateful to several folks who offered advice, critiques, suggestions, and proofreading.

This is the front cover, designed by my friend Eduardo Mitchell:

The back cover, designed by Lake Writers president, Chuck Lumpkin: 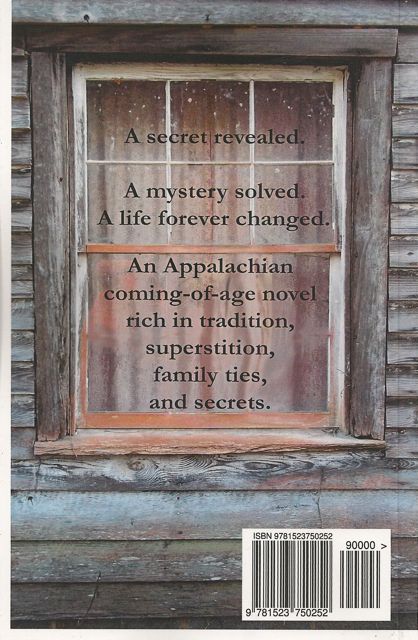 A secret revealed, a mystery solved, a life forever changed.

In 1972, seventeen-year-old Annie Caldwell—who has the “gift” of animal communication—wants to be normal, but she’ll settle for being unnoticed. Annie’s brother died in Vietnam, her mother is depressed, and her father drinks. Her only friend is elderly Aint Lulie—who lives in the same holler and who understands the gift because she has one, too: “The first daughter in ever’ other generation has always been blest with a gift, though some think it a curse. Been that way for generations in the Caldwells, Byrnes, and once in a while in the Duffs.”

As they sit by the fireplace in the evenings and tell each other stories, Aint Lulie shares family history with Annie, including a relative's mysterious death and how their ancestors came to settle in the area: “There’s always been them that go and them that stay in ever’ generation.”

When a local girl goes missing, Aint Lulie's and Annie's gifts can help solve the mystery—but if Annie speaks up, she can no longer go unnoticed.

Them That Go is an Appalachian coming-of-age novel rich in tradition, superstition,  family ties, and secrets.

Q. What?s the background of Them That Go?

A. I spent over eight years writing Them That Go, and it has gone through several title changes and even more plot changes. It started as What the Dogs Told Me, a YA novel about a rural 17-year-old girl in 1972 whose ability to communicate with animals sets her apart from her peers but helps her solve a crime. I submitted the first few pages to a panel of agents and editors at a writing conference and was told YA readers don't care about the early 70s and my characters were stereotypes. I abandoned the project.

A few years ago, I started working on the idea again, and the book became If Only We Listen, a women's novel switching between the 1970s and now, in which an animal communicator solves mysteries both as a teenager and an older woman. That version was a disaster because the first chapter (set in the present) pretty much gave away what had happened in the 70s. So I abandoned it again.

For several years, the first 20,000 words of what became Them That Go took up space on my hard drive. It was either delete them or finish the book. I hate to waste anything, even words, so I started working on the manuscript again. It changed directions a few times before I realized the story needed to be about more than just a girl's isolation because of her special ability; it needed a stronger sense of place, a sense of generations that had gone before, a connection to past and present. It needed a richer texture, with more Appalachian flavor.

When I started working on the book again in September 2015, it changed considerably from my original idea. Some minor characters no longer just occupied a space but became important to the plot, superstitions and traditions became more significant, a few plot twists appeared, and Annie grew as a character. The book became both a coming-of-age novel and an Appalachian novel. The readership could now include more than just YA readers.

Q. What influenced your finally finishing the book?

A. In 2015 I became interested in genealogy--in finding my roots as far back as I could. I learned a lot of my ancestors had moved across Virginia. The English ones came westward from the Tidewater area, and others came down the Great Wagon Road from Pennsylvania or diagonally across Virginia from Maryland. Some stayed where they originally landed, but some in each generation moved a little farther south or west. After the Revolutionary War, some received land patents and moved their families to the new territory. But in every generation, some would stay and some would go.

Q. Since you used Franklin County as a setting for your two previous novels, Patches on the Same Quilt and Stuck, why didn?t you also set Them That Go there?

A. I wanted to write an Appalachian book. Franklin County is just outside Appalachia. I also wanted a place much more remote and rural than Franklin County was in the 1970s. Annie's isolation, not only from her peers but also where she lives, is important to her character development. I wanted high mountains that could keep a lot of outside influences out. I also wanted a place where early settlers of Irish descent would pass through. While Franklin County did have some early Irish settlers, most of the early ones were English who came from the Tidewater area.

Q. Them That Go is set in a made-up county, Bosworth County. Since you mention Roanoke and Botetourt Counties as well as a lot of other real places, why didn't you use a real county in deep southwest Virginia or eastern Tennessee or eastern Kentucky or western North Carolina?

A. I couldn't find a county exactly like what I was looking for. So I made up a mountainous rural county with a small town as its county seat--a county that had a few outsiders (though not many), that wasn't very close to a large city, etc.

A. The Vietnam War was winding down, but its impact was still strong (as it was in Annie's family); the world, including rural areas, was becoming increasing modernized but there were not yet any cellphones, Internet, or social media which can spread information faster than I would like; and criminal investigations didn't yet use DNA.

A. It touches on several issues that concern us now:

Q. Why did you have Annie influenced so much by what her English class studies?

A. Originally, she wasn't. The only classes I originally mentioned were PE (where she could take a shower) and home ec (where she makes a quilt). But what was happened in government and English classes was also important, so I added several more scenes that took place in those classes. What Annie studies in English class influences some of her actions: Frost's poem "A Road Not Taken" makes Annie realize that she has choices, she and Aint Lulie tell each other stories like the Canterbury pilgrims did, and Hamlet affects her in several ways as well. The fact that I taught English for three decades probably figured into it, too.

Q. How did Facebook help you with the book?

A. Several ways. When I asked for correct terminology for some things in the book, FBers jumped in and helped out: (What is the storage space behind a buggy called? Boot; Is slop jar more suitable than chamber pot for the ceramic urn-like vessel? Yes.)  When I was looking for a true ghost story set in a particular area, novelist Sharyn McCrumb and Ferrum College professor Tina Hanlon suggested the Greenbrier ghost.

Folks on Facebook's Botetourt County Genealogy page helped me solve a family mystery, too, by providing an obituary for a great-aunt who died mysteriously and then telling me where to find info about her cause of death, cholera morbus.

When I'd posted on my FB page about my great-aunt Pearl Nace on the anniversary of her mysterious death in 1911, a couple of my cousins discussed the mystery with me--how Pearl died was a family secret that Pearl's sisters would never discuss. One cousin said I should write a book about it. I said it wasn't enough for a book, but it was enough for a scene in a book. So the mystery--and speculation on what might have happened-- inspired the fictionalized account in Them That Go.

Q. Why did you use a door on the cover?

A. One of the main themes of the novel is staying and going. Some characters in the book stayed, and some left. The door is both a way in (to stay) or a way out (to go). The door on the cover is the front door of the cabin on Smith Farm, which my grandparents bought in the early 1900s and which I now own.

Q. Is there a preview for Them That Go?

A review by story-teller, Linda Goodman:

I stopped doing CD and book reviews at the end of 2013, but reading Becky Mushko’s latest book Them That Go, set in the 1970’s in the same Virginia mountains where I was born and raised, has inspired me to put on my reviewer’s cap one last time.

This book is a coming of age story about Annie Caldwell, a teenager who truly marches to the beat of a different drummer. Her family is poor, and they live in a run-down home that has no electricity and no indoor plumbing. Even though a year has passed since his death, the family is still in mourning for Annie’s brother, who was killed in Viet Nam.

Throughout the trials and tribulations of adolescence, Annie’s best friend and confidant is her Aint Lulie, who dispenses advice like good medicine: “There’s always been them that stay and them that go in ever’ generation;” “Don’t waste words on them that will not listen nor understand.”

Aint Lulie, whose second sight allows her to have visions of the dead, also helps Annie use and understand her own gift of the second sight, which allows her to communicate with animals. This gift will serve her well in a variety of circumstances, including the search for a missing beauty queen and her football player boyfriend.

I particularly enjoyed becoming re-acquainted with the customs and superstitions that I left behind so many years ago. “If a bird makes a nest of your hair, you’ll go crazy.” (My brother’s head was attacked by a bird once. It took away a big chunk of his hair.) “We rubbed our faces and arms with mashed peppermint leaves and stems to keep away the skeeters.” (It works.) My favorite: upon leaving someone’s home, the guest says, “I’d ought to go. Y’all ought to come with me.” The host replies, “I cain’t. You ought to spend the night.” I remember my own aunt almost falling out of her chair when one guest took her offer seriously and agreed to stay the night.

As for me, this book made me homesick. I think it’s time for a visit.