Patches on the Same Quilt 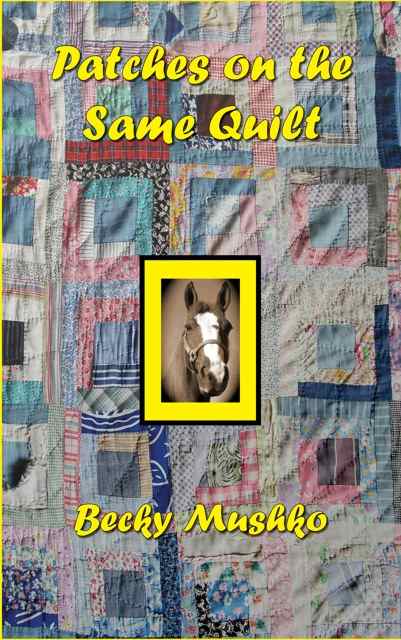 Patches on the Same Quilt, winner of the 2001 Smith Mountain Arts Council Fiction Contest, was self-published thanks to a generous grant from SMAC which covered a third of the cost of the first thousand copies. Had SMAC not underwritten part of the cost, publicized the book, and set up readings and signings for me, I doubt I’d have self-published. However, the self-publication process and the subsequent promotion was an invaluable learning experience.

For the new edition, Eduardo Mitchell created a new cover. The old cover looked like this:

Patches on the Same Quilt is a series of related stories told by members of six generations of a Franklin County, Virginia, family. A young boy's wish for a horse changes not only the direction of his own life but also the lives of his children, granddaughter, and great-granddaughter. As his grandmother, the quilt-maker Gillie Anne, says, "We might not be cut from the same cloth, but we're all patches on the same quilt." Each character's story adds a patch to the pattern of interconnected lives.

Brad Burkholder, judge of the SMAC contest and teacher of creative writing at Virginia Western Community College, said this about Patches on the Same Quilt:

The writing is all but flawless. The story becomes painfully touching in places, and when all the threads are tied together  at the end, the result is spell-binding, beautiful and emotionally moving. Through the course of time, the horse has been  man's greatest companion on earth, a point that those of our time do not fully understand. The novel's use of the horse as  a metaphor for human longing, human self-preservation--indeed, all of those traits within us that we are apt to call human--comes  into clear focus only at the end, and when it does, the effect is breathtaking.

A review which originally appeared in the June 2006 issue of The Blue Ridge Gazette, is now posted on  Leslie Shelor's blog, Books and Reviews at Greenberry House (Since this an older review, my contact information in her links has changed—it's now this): http://greenberryreviews.blogspot.com/2006/07/patches-on-same-quilt.html