A new spin on an old story

Gillie--a skilled spinner of wool--leads a charmed life high in the Blue Ridge Mountains until a hailstorm strikes. With their cash crop destroyed and taxes due, Gillie and her pa risk losing their farm. Then a strange little man appears and gives her the power to spin hay into gold. As she and her pa leave the courthouse after paying their taxes, Gillie bumps into the handsomest man she's ever seen. William courts her, marries her, and the following year they have a beautiful daughter. When the strange little man eventually returns and demands his payment, Gillie doesn't know what to do. 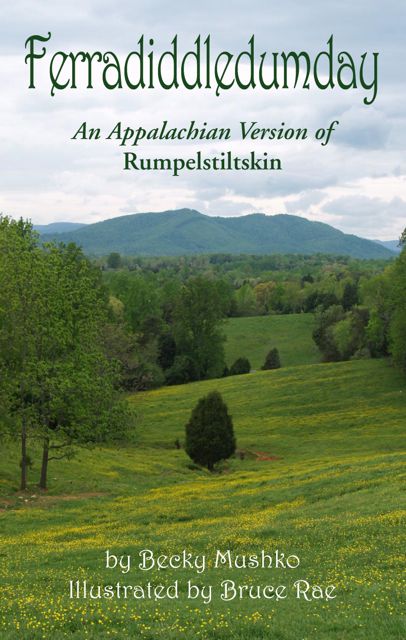 An earlier version of Ferradiddledumday, posted on Ferrum College's AppLit website, has been used by teachers around the country. However, the story hadn't existed in book form until January 2010 when it was published by Cedar Creek Publishing. Ferradiddledumday was named by January Magazine as one of the best children's books for 2010.


Q. How did you get the idea for Ferradiddledumday?

A. Ferradiddledumday began as an oral presentation. In 1998, Jo Weinstein, who'd recently retired as dramaturg for Mill Mountain Theatre, had an idea for an educational presentation about the history and culture of the Blue Ridge Parkway. We formed a group called Homespun and developed some stories and poems to use in our performance. Because one member of our group, Susan Alkadhra, was a spinner, I thought that an adaptation of the Rumpelstiltskin story might be effective. I worked in references to the flora and fauna of the Blue Ridge, and the story became a part of our presentation.

Q. Has the story appeared in print before?

A. In the late 1990s, I was a contributing writer to Blue Ridge Traditions.  I rewrote Ferradiddledumday as a short story, and editor Peggy Conklin serialized it. When I became an adjunct instructor at Ferrum College in 1999,  English professor Tina Hanlon posted an early version of the story on her extensive AppLit website. We developed a short study guide and teachers across the country used Ferradiddledumday as part of their lesson plans. Several asked if it was available in book form, and I had to say no. Now the revised and expanded version is.

Q. How did you come up with the title?

A. In the Appalachian Mountains, flying squirrels--and sometimes red squirrels--are called fairy diddles. I once read a tale where the term taradiddle was mentioned. Several dictionaries  define the slang or colloquial noun taradiddle or tarradiddle as a petty lie or pretentious nonsense. The term dates from the 1700s.

I combined the words and added a whimsical ending. I like the way the name Fer-ra-diddle-dum-day rolls off the tongue. It's fun to say aloud.

Q. Is Ferradiddledumday the only adaptation of the Rumpelstiltskin story?

A. No, there are actually many adaptations. Ferradiddledumday is, however, the only Blue Ridge version that I know of. The SurLaLune fairytale website lists many of them, including Ferradiddledumday.

Q. How did you find your illustrator?

A. Bruce Rae, a retired art teacher, was a member of my writing group.

Q. The illustrations for Ferradiddledumday are kind of dark and edgy. Do you think those will appeal to kids? 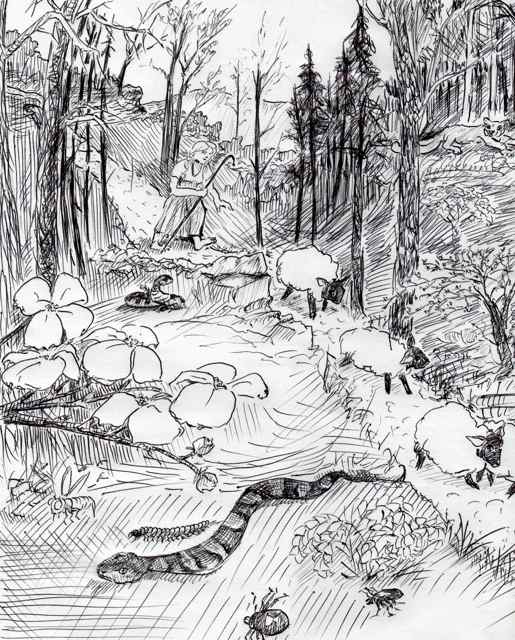 A. I hope so. Because many of the illustrations are kind of complicated, I think kids will enjoy studying them. They might see something different each time they look. The darkness of the art also adds to the mysterious element of the story.

Q. For what age group is Ferradiddledumday written?

A. The target age is seven to twelve--upper elementary and middle school students who already know the original Rumpelstiltskin story and can compare and contrast this version with the original. Ferradiddledumday can be enjoyed as a simple story, or it can be used as part of a science, geography, or history lesson. It can, of course, be read aloud to young children. For educational purposes, it is ideally suited for third grade because it meets some of the Virginia Standards of Learning for that grade. And, of course, there's a study guide included.

Q. Are there other groups to which Ferradiddledumday would have particular appeal?

A. Teachers, libraries, parents who homeschool, anyone who enjoys fairy tales and Appalachian stories will enjoy it. It's a perfect book for a grandparent to read to visiting grandchildren.

Q. Have you written anything else for young people?

A. I had a now out-of-print collection of short stories--Where There?s A Will--that I published in 2005 through the print-on-demand publisher, Infinity; sometimes copies are available on Amazon.com. That story collection also comes with a study guide geared to the 6th grade Virginia Standards of Learning. My middle grade novel, Stuck, was published by Cedar Creek in 2011.

Most of my stories for young people are set in the Blue Ridge Mountain area; some are set in Franklin County. As a kid, I always liked to hear the old-timey stories. As an adult, I like to tell stories with an old-timey flavor.

Becky Mushko's retelling of the European folk tale Rumpelstiltskin brings a new world perspective to the old story, illuminating the frontier setting with a wealth of detail: plant names, folk traditions, and regional dialect. If the story had happened here, it would have happened like this.

Ferradiddledumday is pure magic, and the wild beauty of the Blue Ridge Mountains is a perfect setting  for the retelling of "Rumpelstiltskin." Comfortable dialogue and unaffected characters expose  our rich Appalachian heritage. The story moves at a leisurely  pace, leaving the reader with a sense of having visited somewhere very special.  It's a story that I will read again and again.  --Joyce Tukloff

From Tina Hanlon, who maintains Ferrum College's AppLit website and teaches children's literature both at Ferrum and in the Hollins University Children's Literature MFA program:

Ferradiddledumday is a heart-warming story about a resourceful young woman with a charmed life. With plants and animals from the Blue Ridge Mountains woven into Gillie's encounters with a mysterious little man, the rhythms of the seasons flow through the story as poetically as the magic of the old fairy tale.  -- Tina L. Hanlon, Ferrum College, director of web site AppLit

From  Amanda Cockrell, director of the Children's Literature program at Hollins University:

Some places are the natural home of folklore, the lands where trees talk and straw spins to gold.  The Blue Ridge Mountains are that kind of place, and Becky Mushko deftly translates the Grimm Brothers' Rumpelstiltskin into an Appalachian fellow, wily and magical, and cleverly at home among the whispering sassafrass and paw-paw. --Amanda Cockrell, Hollins University