Born in Roanoke, Becky has lived in Richmond, VA; Newport News, VA; Lanesboro, MA; and Charleston, SC. She currently lives in rural Penhook, Virginia, with her husband and a herd of cats. Her hobbies include genealogy, blogging, living frugally, and reading--especially Southern writers and Appalachian writers.
She received her BFA in Drama Education from VCU (when it was still RPI) and her MAT in English Education from The Citadel. She's also taken graduate classes at UVA, Radford, and High Point College.
Before taking early retirement from Roanoke City Public Schools in 1997, she'd taught for nearly thirty years. She taught English and drama at Poquoson High School (1967-68); then her husband was transferred to Charleston, SC, where she earned an MAT in English from the Citadel while teaching English at St. Andrews Junior High. After moving back to Roanoke in 1972, she taught at Madison Junior High, Stonewall Jackson Junior High, William Fleming High, and Ruffner Middle School. After retirement, she taught at ECPI. When she and her husband moved to Franklin County in 1999, she became an adjunct instructor of English at Ferrum College until 2006, and then  served as 2006-2007 writer-in-residence for Roanoke County Schools. Galax Leaf & String Festival, June 2011
Becky is a lifetime member of  Virginia Writers Club and served as vice-president of  Lake Writers for over a decade. She also served for seven years on the Board of Trustees of the Franklin County Library Board and was literary coordinator for the Mountain Spirits Festival in Rocky Mount, VA, for all three years of its existence.

Since 2002, she has also participated in several bookfests in Bedford, Franklin, Pittsylvania, and Hanover Counties. A three-time winner of the Sherwood Anderson Short Story Contest and a five-time winner of the Lonesome Pine Short Story Contest, she was nominated for a 1997 Pushcart Prize for "Angel on Ice," which appeared in THEMA's Jogging on Ice issue and is republished in Miracle of the Concrete Jesus and Other Stories. 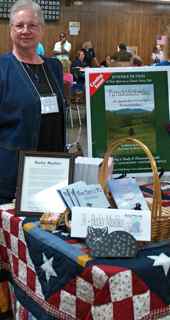 In addition to Ferradiddledumday and Stuck (her two books from Cedar Creek Publishing), she has self-published books of regional interest: Patches on the Same Quilt, Them That Go, and Miracle of the Concrete Jesus & Other Stories.

She has also published e-book versions of her novels, Stuck, Them That Go, and Patches on the Same Quilt, as well as e-book collections of her short stories: Rest in Peace (her three Sherwood Anderson winners), Over Coffee (five stories about awkward relationships),  The Best 'Un Yet (five Christmas stories) and Miracle of the Concrete Jesus & Other Stories.

Her articles, book reviews, poems, or stories have appeared in Vol. II & III of Anthology of Appalachian Writers, Prime Living ("Blogging to Adventure" is online), THEMA, Blue Ridge Traditions, Virginia Adversaria, several volumes of the Poet's Domain series, Roanoke Times' Christmas Memories, A Cup of Comfort for Writers (Adams Media, 2007), It Was a Dark and Stormy Night (Friday Project, 2007), Leisure Publishing's 2008 Smith Mountain Lake Visitor's & Newcomers Guide, and the Lake Writers anthologies (Voices from Smith Mountain Lake and Reflections on Smith Mountain Lake.) She also has work in the 2018 Centennial Anthology of the Virginia Writers Club. A 2008 Prime Living article about her is here.

She became interested in genealogy a few years ago and has a blog, The Naces of Lithia, about the Nace side of her family in Botetourt County.

She is available for a limited readings, presentations, and workshops in areas within 30 miles of  Franklin County, VA.